Whether it is your first time in Palma or you have been before, you cannot leave the city without visiting Santa Eulalia church. Make the most of your day in Palma and rent a bike at our shop just 2 minutes by bike from this wonderful church. 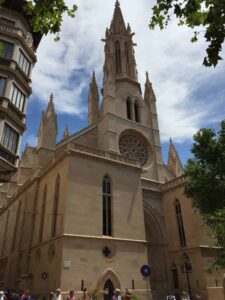 On December 31st of 1229 the city of Mallorca surrenders to king Jaime I, monarch of the Aragon kingdom. At the same time starts the conversion of the Muslim city into a Christian city.

After the conversion the new Christian city will be divided in two parishes: San Miguel and Santa Eulalia, which will act not just as spiritual centres but as administrative centres and trade association.

Santa Eulalia dates back to 1236 and it is a full gothic construction except for the neo-gothic bell tower built on the XIX century. It is important to highlight its terraces in which you can appreciate medieval gargoyles, symbol of the fight between good and evil, sin and virtue.

This church is located in Santa Eulalia square where an ancient cemetery used to stand, that is why ten funerary arcs and four tombstones can be observed in one of the sides of the building. At the main door we find Saint Eulalia with the palm of martyrdom in the hand as a sign of victory over the martydorm. The side doors are decorated with paintings of the XV century barely visible because of deterioration.

Inside we can find the woodcarving of the Saint Christ of the Conquer from the XIII century, also known as the Miracle Christ. According to the legend, the carving brought to life in favour of a penitent to whom a priest denied its forgiveness saying: Look what I have to do so that you forgive him. Forgive him!

If you want to know all the secrets and hidden corners of Palma do not hesitate to make a guided bicycle tour with us. Besides if it is your last day and you do not want to carry with your luggage you can leave it at our left luggage in the very centre of the city.