Must visits in Palma de Mallorca

The best way to get to know Palma de Mallorca is by bike. Make a guided tour with us and discover the city in a different way!

1. Mallorca’s Cathedral: The “Catedral de Mallorca” (translated into Majorcan as La Seu) is a Levantic gothic temple, built at the shore of the Palma de Mallorca bay above the city rampart. It is the cathedral with the biggest gothic rose window worldwide.

Its construction began in 1229, after the conquest of the island by King Jaime I of the Aragon kingdom. This King decided to tear down the Great Mosque of Medina Mayurca and build a temple to honour Saint Mary after a promise made during a heavy storm in a journey to Mallorca, if Saint Mary saved him from death, as it finally happened.

Although King Jaime III consecrated it in 1346, its construction did not end up until 1601. 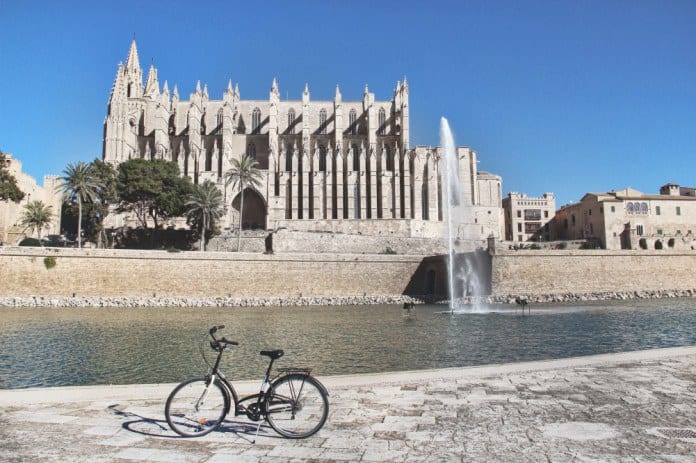 2. Lonja de Palma de Mallorca: The Fish Market in Palma de Mallorca (translated into Majorcan as Sa Llotja) is one of the most representative Majorcan gothic buildings. Its construction was carried out by Guillem Sagrera, starting to get built in 1420 and finalizing in 1452. It was the headquarters of the Colegio de Mercaderes (merchants association).

The building is articulated in three naves of the same height separated by six helical columns with no capital. In the main nave you can find the Corona de Aragón coat of arms, as well as the one of the city of Mallorca in one of the side naves.

La Almudaina is the Royal Palace or Royal Alcázar of the city. It is the place used by the King and Queen of Spain as their official residence for ceremonies and receptions when they are in Palma.

It is a restoration of a Muslim building known as “Zuda”. King Jaime II rebuilt the palace from 1309. In this building the monarchs of the Majorcan, Aragon’s and Spanish kingdoms held their courts successively.

The present building keeps the structure built in the 14th century. Some of the most important elements are the palace of the king and the queen, the chapel of Santa Ana or the baths. 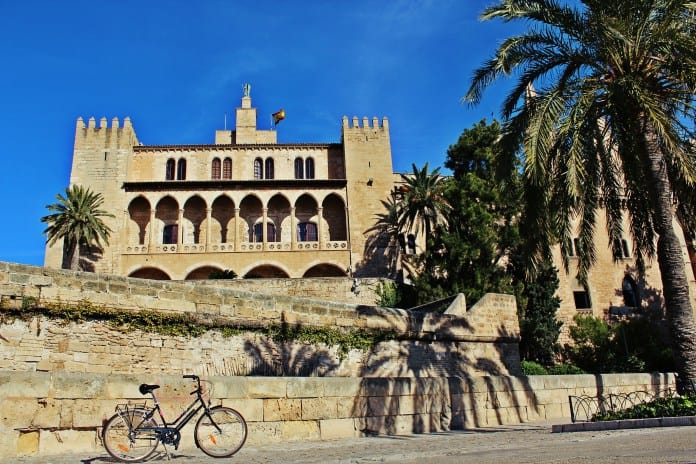 It is the perfect place to enjoy Palma on a bike. It is a seaside promenade, which starts at the Pelaires pier where the cruises dock, near Porto Pi mall, and ends at the Club Náutico El Arenal. The bike lane is 20 km long on this section.

During the ride you can observe some of the most representative buildings of the city such as La Catedral, La Almudaina or La Lonja. At the boardwalk you can also find plenty of bars, where you can stop to chill and have a beer or a snack. 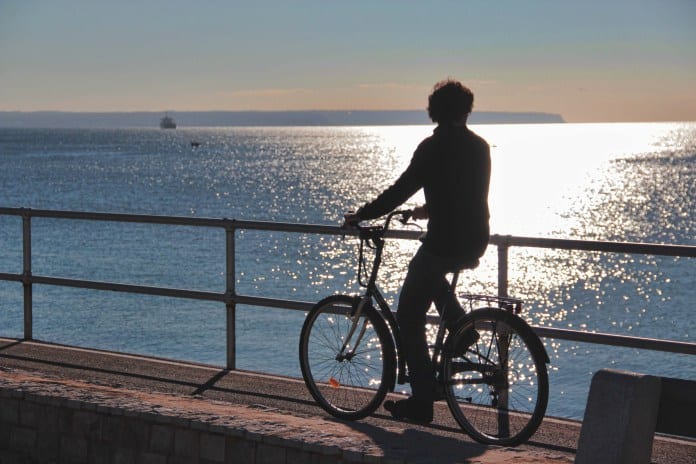 5. Parque del mar: It is a city park built in the 70’s in Palma de Mallorca. Located in the Paseo Marítmo de Palma, it is close to the cathedral. The park was built over a surface gained to the sea and as a memorial, a huge salt water lake was also constructed with a big pump. The lake is located between the city rampart and the sea. 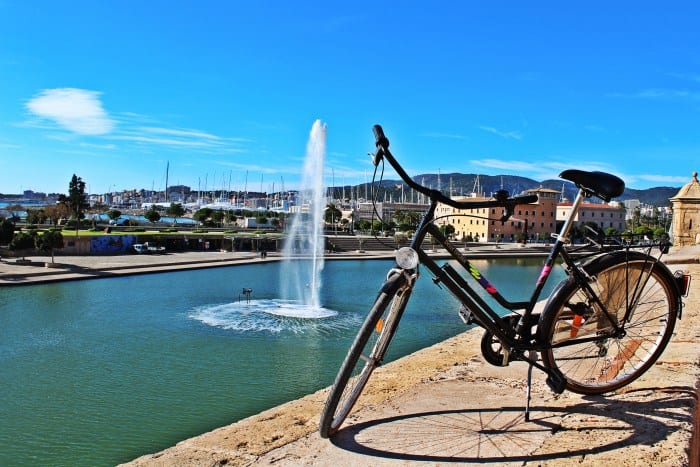 6. Old town churches and palaces: The old town of Palma houses old churches, palaces and aristocratic mansions with their precious patios. These are distributed all over the city centre adding up to more than forty. (Further information about patios can be found at the 14th point).

A ride through the old town is one of the most recommended tours of the city.

The Plaza Mayor de Palma is located in the city centre close to other important monuments as the Iglesia San Miguel, the Iglesia Santa Eulalia or the Teatro Principal. Until 1823 the square was the Inquisition headquarters, and was later replaced by the monastery of San Felipe Neri.

In its surroundings there are several of the most important shopping streets such as San Miguel, Jaime III or Sindicato.

It is located in a 17th century building, which at first was built as an old aristocratic house in San Miguel Street, in Palma’s old town. The museum was reformed by the architect Guillem Reynés i Font and houses a section of Juan March’s collection since 1990.

9. Ramblas: Las Ramblas de Palma is a walk built where it used to float the Riera torrent, which was diverted towards the current Paseo Mallorca.

It consists of a pedestrian walkway, where there are many stands in which you can find all kind of flowers and plants. There are also two vehicle lanes in both sides of the walk.

10. Gran Hotel: The Gran Hotel de Palma is one of the best modernist buildings of the city built by the architect Luís Domènech i Montaner and ended in 1903. The building front is decorated with ceramics and sculptural elements.

The Gran Hotel was the first luxury hotel in Mallorca and it was the most luxurious hotel in Spain until the Hotel Ritz opening in Madrid.

Since 1993 it has been used as a cultural centre for the Fundación La Caixa, where you can attend several exhibitions, concerts and conferences.

11. Plaza de la reina: The Plaza de la Reina is located at the end of El Borne, next to the Conquistador street slope and Costa de la Seu steps. It has a round central fountain and a nice garden with flowers which links the square with La Almudaina.

Built in 1863 by the architect Antoni Sureda, where the Convento de San Francisco de Paula used to be.

12. Plaza de Juan Carlos I: It is the square located at the beginning of the Paseo del Borne and its popularly known as Plaza de las Tortugas due to the turtles which stand up the obelisk placed at the square.

This square is also the place where the football team of the island, R.C.D. Mallorca, celebrates its victories.

13. Paseo del Borne: It is a walk which links the Plaza de Juan Carlos I and the Plaza de la Reina. Formerly called Paseo de la Princesa, in honour of princess Isabel II, who started ruling in 1833, year in which the refurbishment of the walk began.

At the beginning of the walk there are lion statues as well as the Casal Solleric, an aristocratic building which currently is used as an exhibition center. The building was constructed by the architect Gaspar Palmer in 1764.

The walk consists of a central pedestrian walkway and a vehicle lane in which you can find several outstanding beauty buildings and palaces besides plenty of bars with their corresponding terraces.

14. Patios Mallorquines: Aristocratic patios of the old town represent one of the most characteristics urban elements of the city. Nowadays they are considered as a must tour, but in their glory times they were a symbol of power and social status.

The oldest patios first known are dated in 14th and 15th centuries. They are located in high nobility and important Majorcan merchant houses as well as aristocratic, middle class professionals, clergy and public servants houses.

In these patios families carried out their lives and all of them have a similar structure; a portal through which you access the patio, a narrow paved floor hall between portal and patio, and the patio itself, an open space with arches, columns and capitals. At the patio you find the stairs that lead to the house.

15. Castillo de Bellver: The Castillo de Bellver is a Majorcan gothic fortification constructed by the architect Pere Salvà and ordered by king Jaime III. The building belongs to the Palma town hall where you can visit the Museo de Historia of the city, with a city history exhibition from the first settlers to the Middle Ages. It is located on a hill 112 meters high. From the top you get spectacular views of the city, the bay, the Serra de la Tramuntana mountains and the forest which surrounds the castle. The name, Bell Ver, means beautiful view in ancient Catalan.

The castle is one of the few in the world with a round floor design and the only one in Spain. The towers are adjoined and the Torre del Homenaje is pierced by a wall and separated from the rest of the castle.

A pit surrounds the castle and at the centre of the patio you can find a parapeted tank powered by a huge underground cistern.

Its location and visibility from any point of the city, as well as from the sea, have made the Castillo de Bellver one of the city icons. The castle is easily accessible, thanks to the parking located at the entrance of the castle and it is recommended to visit it by bike so as to enjoy the forest surrounding it. 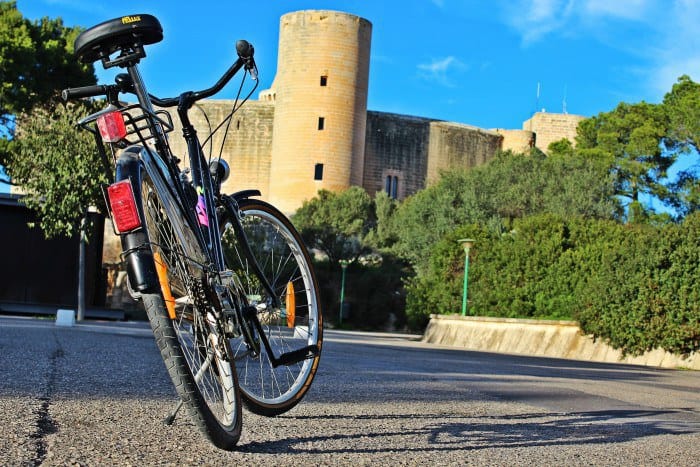